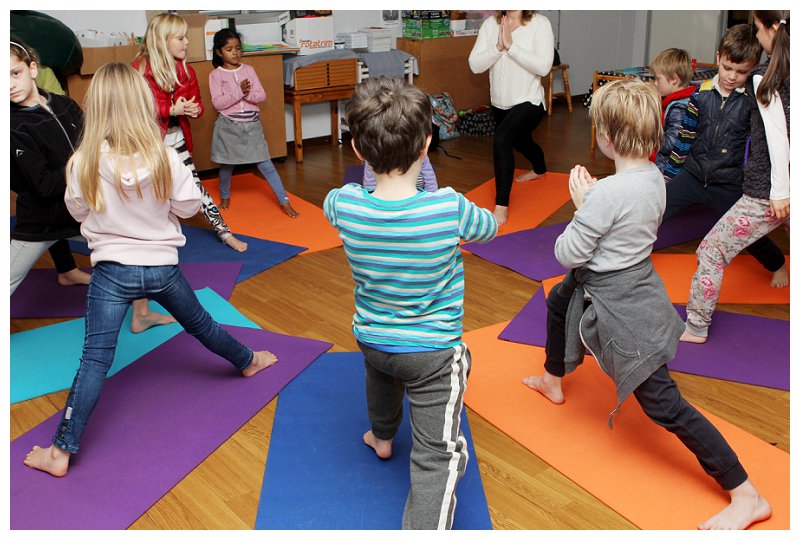 Yoga is pretty popular these days, and for good reason. Anyone who’s tried it for a while will attest to the many benefits of living the yogi lifestyle. Traditionally however this activity was the domain of (mainly female) adults. Well not so anymore. In recent years the sport/philosophy has gained increasing followers among non-traditional yogi groups including male muscle builders, older folks and children. It may surprise you to think of kids doing yoga especially, but it is actually a great activity for children. If you need more convincing here are four great reasons to get kids practicing yoga today!

One of the best things about yoga is that it leaves you feeling much calmer than when you started. This is a huge benefit for many people, but in our hectic and over-stimulating world it’s especially important for children. Encouraging kids to find a way to spend an hour out, relaxing and calming themselves, really reaps rewards for their behavior during the rest of the day. If your little one gets a bit hyper see whether yoga can chill them out.

The stretching and exercises that yoga involves has another positive impact on children: it connects their minds and their bodies. This is important during childhood when kids bodies are changing and growing so fast. Yoga gives them the space to think about their bodies and research suggests doing the activity regularly can make them feel less physically self-conscious.

Sometimes all you want to do is learn how to make ice cream and curl up on the sofa for a cozy night in. And for kids that’s absolutely fine now and then. Combining fun, lazy evenings with more active days is one way to achieve a healthy balance in life and after you’ve learnt how to make ice cream your body will probably feel like doing something more taxing to work it off. Yoga can be as physically intense as you want it to be, so is great for kids who don’t get lots of exercise in other ways.

Because yoga involves concentrating on your breathing, posture and the slight movements of your body it is a great activity for those needing to build their ability to focus. After practicing yoga for a few months many people report an increase in their ability to stay in the moment and concentrate on the task at hand. Considering how important this skill is for getting school work done, yoga could be a great adjunct for kids struggling academically.

There are so many benefits to doing yoga at all ages, but for kids it really can be a lifesaver. The trick is not to stop after just a few sessions, keep your child at it for a few months and they’ll eventually get the yogi bug!